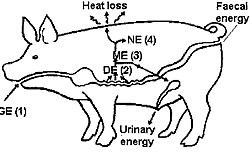 Pigs require energy to maintain normal body processes, and to grow and reproduce. Feed ingredients that supply energy are major components of all pig diets, and the quantity of a diet voluntarily consumed by a pig depends on its energy content. Consequently, feed is the largest single economic input in pig production, and energy efficiency is closely associated with production efficiency.

More than 80 per cent of the energy content of conventional diets used in commercial pig production comes from carbohydrates. In Australia, wheat, barley and sorghum are the most important grains that supply energy that are fed to pigs. Fats and oils contain more energy than carbohydrates per unit weight but are less important diet constituents, except where they are frequently used to increase the energy density of the diets of weaners. Amino acids or proteins also may function as energy sources if they are included in diets in excess of a pig's requirement for protein deposition.

The energy content of a feed may be broken down into the following components (see Figures 1 and 2), some of which are more easily measured than others:

Figure 2. The energy content of feed may be broken down into a variety of components.

Why digestible energy is used to describe feed energy

NE is the ultimate choice for expressing feed energy content because it estimates the amount of energy available for production. However, it is affected by factors such as diet and production system, so it is not a convenient system for describing individual feeds.

ME is closer to NE than DE, in that it accounts for the energy lost in urine. This amount is small, and depends on both the diet's amino acid balance and the pig's requirements (i.e. a greater loss occurs if there are surplus amino acids). To account for this and aim to standardise ME values, they are often corrected to a given nitrogen (protein) retention. ME is more difficult to determine than DE.

DE accounts for losses in digestion and is relatively unaffected by the pig's breed, age, weight or sex; the diet's amino acid balance; or the level of feeding. Therefore, DE values are generally a characteristic of the ingredient and the value most used in diet formulation.

The DE values quoted in the literature are faecal digestible energy. More recently, there have been moves to improve digestible energy values by measuring them at the end of the ileum because energy digested here is more efficiently utilised than in the hindgut, and, therefore, may be closer to the actual energy available for production. However, the data available for various ingredients using this method is limited.

When determining a feed's faecal digestible energy value, the pigs are kept in metabolism cages. Over the first 10 to 14 days, the pigs are allowed to adjust to the test diets. Then, over the next five to seven days, the feed intake is kept constant and the faeces produced during this period are collected. The feed samples tested are either fed as the whole diet, such as wheat or barley, or as additions or substitutions to a basal diet, such as protein concentrates, as these cannot constitute the entire diet. At the end of the collection period, the faeces are mixed, sampled and analysed for GE. The feed is also analysed and its DE calculated as follows:

DE is relatively independent of many factors, and those factors that do occur are generally ignored in diet formulation.

The major limitation of DE as an indicator of energy for production is that the relationship between DE and NE is not constant. Fibre is not digested in the small intestine but passes to the large intestine where micro-organisms convert part of the fibre to volatile fatty acids, which are then absorbed. Digestion in the large intestine is less efficient (approximately 20 per cent efficiency) than the direct absorption of energy from the small intestine (approximately 80 per cent efficiency). Thus DE can overestimate the NE content of high-fibre diets. There are also differences in the efficiency of NE usage even with nutrients that are absorbed in the small intestine; for example, energy in the form of fats and oils is more available to the pig than energy from carbohydrates.

All these limitations of DE values are generally ignored in diet formulation. However, in the future, computer models that simulate metabolic processes may be used and NE values of feeds may be used more.

There are many variations in DE ingredients, such as within the same cereal grain grown on different sites or in different seasons. Table values (averages of testing/prediction of a number of samples, available in reference books) have to be used where predictions, such as via near infrared, are not available to determine the content of a particular batch of an ingredient.

Continuous updates on the DE, ME and NE content of new sources of raw materials are required. It is best if the range in values can be determined for each class of ingredient.

More emphasis should be given to providing information on the energy content of feed ingredients rather than mixed diets, as the former is needed as a basis for formulating diets. Until there are developments in quantitative fibre determination and a greater understanding of the factors influencing energy utilisation, table values for DE and ME remain more applicable than prediction equations for many assessments of feed ingredient energy value.

Recent studies have shown that even small variations of DE in some cereals can substantial affect returns to producers. For this reason, there is much emphasis on new technologies, such as near infraread, to better and more rapidly assess grain nutritive worth. Similarly, processing techniques to reduce particle size, pelleting and in-feed enzymes are being examined as a means to improve the DE value and yield of grain ingredients.

Characterising feedstuff components into total, digestible or available nutrient levels is improving the feed formulator's precision to ensure that a diet nutrient supply meets the nutrient need of different classes of pig. This means that efforts to optimise feed efficiency while minimising feed cost and waste will be more successful.