Boar semen collection is commonly done in closed herds where, for health reasons, it is unwise to put introduced boars with the herd. These boars are kept well away from the main herd in pens equipped with a dummy sow.

In piggeries relying on natural mating, artificial insemination (AI) is used in emergencies when death, lameness or refusal to work decreases the number of herd boars fit for service. AI can also be used to overcome the size difference between boars and sows.

Who may collect semen

The Queensland Artificial Breeding of Stock Act 1979 does not apply where:

The Act and Regulations do apply where:

A veterinarian must be present at artificial breeding centres when semen is being collected, the premises must be registered and certain technical staff must have appropriate certificates of competency.

Semen is collected while the boar mounts a dummy sow. This is preferable to using an oestrus sow when semen is routinely collected. It avoids size differences between animals and the sow's reluctance to support the boar's weight until ejaculation is completed. Using an oestrus sow is feasible when only collecting occasionally. Figure 1 shows dimensions for an adjustable dummy sow. 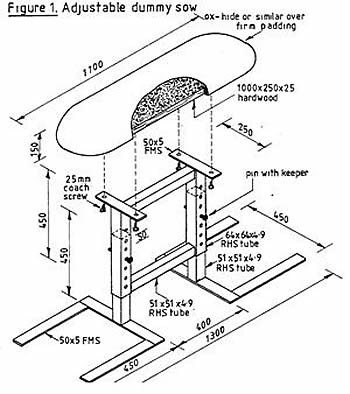 A plastic insulated flask or polystyrene cups (minimum capacity, 250 mL) commonly available from supermarkets are used for collecting semen. A semen filter (fitted over the collection flask) is made from surgical or bandage gauze. A polythene graduated measuring cylinder will be needed if semen is evaluated by volume.

Soak reusable containers in cold water straight after use, making it easy to clean later. Gel particles can be removed with a brush. Do not use soap or detergent because these residues affect sperm viability. Rinse the containers several times in boiling water and allow to dry, later storing them in a dust-free cabinet or in a sealed plastic bag.

Young boars are easily trained to mount a dummy sow, but boars normally used for natural mating may be more difficult. To train a boar, place the dummy sow in an area the boar knows, such as his pen or the mating pen (in strange territory he may start by exploring the surroundings). The smell of another boar's semen, saliva and sow urine on the dummy helps stimulate the trainee boar to mount and thrust. If the boar does not react to the dummy, use an oestrus sow to arouse him; collect a little semen before removing her. His own semen smeared on the dummy may attract him to it, however this procedure is seldom needed.

Rough handling, an injury or a fall during training can discourage the trainee boar. The dummy must be set at the right height for him, be stable, comfortable, have no sharp projections and stand on a dry, slip-free floor. Use a non-slip mat to overcome any floor surface problems.

When the boar is mounted on the dummy grasp the spiral end of the penis with the hand (gloved or bare, it must be clean, dry and warm). Allow the boar to thrust through the clenched hand a few times before applying pressure. Hand pressure on the spiral part of the penis imitates that of the oestrus sow's cervix, stimulating ejaculation. With experience, it becomes obvious that some boars prefer more pressure than others. The long hairs around the boar's prepuce should be clipped to minimise injury.

When the penis is 'locked' in the hand and the boar relaxes, a four-phase ejaculation follows in a few seconds, taking 5 to 10 minutes to complete. The first phase, called the pre-sperm fraction, has clear seminal fluid, some gel, dead sperm cells and is heavily contaminated with bacteria. It should not be collected.

The next phase is the sperm-rich fraction, easily recognised by its creamy-white colour. Although only 50 mL in volume, it contains the greatest density of spermatozoa. Because spermatozoa are very sensitive to rapid temperature change, a warm, dry, insulated collecting flask is required to safeguard semen fertility. The third fraction, greyish because of lower density of spermatozoa, accounts for about 80 mL of the collection. Fractions two and three only are collected when semen is to be diluted for storage over a few days.

The fourth phase or post-sperm fraction provides the large semen volume peculiar to pigs. Up to 250 mL of clear seminal plasma free of spermatozoa plus gel is secreted from the accessory glands. The gel portion apparently has no physiological significance. It is separated from the collection by several layers of gauze or a similar filter fastened over the collection flask. Filtering particles of gel from the semen prevents catheter blockage during insemination. Hair, skin or dust particles from the boar or dummy must also be excluded from the flask during collection.

Large amounts of gel signal the end of ejaculation. When it is clear the boar's erection is fading, a second ejaculation can be stimulated with brief, firm, pulsating hand pressure applied to his penis.

To ensure high sperm cell concentration and semen volume, do not collect boars more than three times a week. Collect twice a day or on two successive days to re-inseminate females bred 8 to 12 hours before. Excessive collection in a short time reduces the quality and quantity of semen and the boar's sex drive.

This is measured in a warm, dry calibrated flask. Semen volume varies between 100 and 500 mL; a large volume does not mean the total spermatozoa content is greater than that from smaller ejaculates. If the semen is to be used undiluted, its volume determines the number of inseminations possible from each collection. The dose per insemination is between 50 and 100 mL.

Subjective assessment of sperm cell motility is the best way of estimating semen quality. Semen from obviously fertile boars need not be routinely evaluated unless dilution is required for inseminating a large number of sows.

Motility depends on how much of each fraction is collected. If the collection is mainly sperm-rich fraction, there is higher motility and wave motion than when accessory fluids dilute the semen.

Accurate estimates of semen density are needed only with high dilution rates done at artificial breeding centres. Density varies from 100 to 500 million sperm cells per mL with 60 to 80 billion in a normal ejaculation. Density is also influenced by how much post-sperm fraction is collected.

Estimates of dead and abnormal spermatozoa in each collection are normally only done at artificial breeding centres. Abnormalities include detached heads, bent and returned tails, broken tails and twin heads or tails. There are more immature sperm cells - evident by protoplasmic droplets on their tails - when the boar has been overworked.

If total abnormalities are less than 25%, semen quality is satisfactory.

The semen collected on-farm can be used undiluted fresh or diluted chilled.

Procedures for microscopic evaluation, extension and storage of semen can be complex and are rarely needed in small within-herd AI programs. Keep the semen at the temperature collected (34°C) and use within a few hours. Best results are obtained when 100 mL of gel-free fraction is used. Before dividing the semen into doses, gently rock the container to disperse sperm cells settled on the bottom. Results with fresh semen compare with those from natural mating. Undiluted semen from young boars can be used to inseminate two or three sows while from older boars, four to six inseminations are possible from one collection.

A simple skim milk diluent can be used but it protects semen for only a few hours. More complex diluents allow chilling of semen and extend 'shelf-life' to several days. Diluents are available from artificial breeding centres and can be freeze-stored until required. They are preferable to the milk diluent. For on-farm AI programs, one part gel-free semen is added to four or five parts diluent; for example, 20 mL of good quality semen is made up to 80 or 100 mL with diluent. Higher dilution is possible when accurate estimates of total live and normal spermatozoa are made.

The basic steps for dilution are:

In cool weather storage at 15 to 20oC is not difficult but summer presents problems. Storage in small polystyrene boxes using frozen glacial acetic acid as a refrigerant is successful. Rubber balloons partly filled with water and then frozen work in a similar way. This method requires monitoring and extra refrigerant added when needed. To avoid cold spots the refrigerant must not directly contact the semen bottles so the box must be fitted with dividers.

With large-scale AI programs, more reliable methods of chilling semen are advisable. Household refrigerators are unsuitable but some portable models can be adjusted to maintain the temperature range required.