Much of the pig industry relies on flushing systems to keep piggeries clean. The process of flushing away the 2.5 to 3 kg a day of manure produced for each standard pig unit typically results in the creation of large volumes of effluent that must eventually be disposed of. Disposal of the final pond-effluent product can be achieved by evaporation in drier areas, however, land application is the most effective method of re-using effluent, and is also probably the best method of disposal. Unfortunately, soils do not have an unlimited capacity for effluent re-use, and effluent application has to be carefully managed to avoid natural resource degradation in addition to ensuring maximum benefit to the producer.

Benefits of effluent or sludge application

Re-use of piggery effluent and sludge can have many beneficial effects:

Unfortunately, effluent application can have a wide range of negative environmental effects and this is recognised in the Environmental Protection Act 1994. Producers who want to take advantage of land application as a means of re-using effluent/sludge, and all the benefits that this can entail, have a moral and legal obligation to ensure that it is carried out in an environmentally sustainable manner. To do this it is necessary to determine and minimise the pathways of risk. These risk pathways may be divided into soil and water resource effects.

Excessive, or poorly planned application can have serious off-farm effects on ground or surface water such as:

Sites with soils suitable for irrigated crop production should be selected to ensure adequate crop or forage production, and rapid nutrient removal. Soils contain a variety of materials that can slow the movement of contaminants, with fine soils generally containing larger quantities of these materials than coarse or sandy soils. However, irrigation of heavy clay soils also introduces the risk of mobilisation of nutrients in run-off water due to slow infiltration of effluent.

It is recommended that effluent should not be applied to sandy soils. Where application to sandy soils is unavoidable, effluent application should be accompanied by careful monitoring and responsive management. Ideal application sites should have slopes that promote infiltration rather than run-off and erosion.

Application rates should be determined from the nutrient or hydraulic factor that is most-limiting (that is, the nutrient that limits the amount of effluent/sludge that can be applied). Effluents can vary widely in their nutrient contents, as indicated in Table 1. As a result, it is essential to obtain an accurate estimate of the composition of the effluent in order to determine appropriate application rates. This can best be achieved by sampling and analysing effluent on an annual or seasonal basis.

Maximum total applications should be calculated for each sludge or effluent nutrient (N, P and K) according to the following formula:

The final application rate for the effluent or sludge should then be based on the most-limiting nutrient, which is the nutrient that requires the most land area in order to be applied sustainably (i.e. has the lowest application rate). The rate of application of effluent or sludge may result in some nutrient levels being insufficient for crop requirements. Inorganic fertilisers may be required in this case to supplement any deficiencies in the effluent/sludge.

Soils have the capacity to safely store phosphorus, however, little nitrogen or potassium tends to be stored permanently in soils.

Safe soil storage only needs to be factored into the equation when calculating phosphorus application rates.

Safe soil phosphorus storage capacities for a range of Queensland soils are provided as examples in Table 1. Contact DAF's intensive livestock environmental management officers via the Customer Service Centre for accurate estimates of the storage capacity for your climate, soil and crop conditions.

**The sodic subsoil layers are not used in calculations of storage capacity in this soil. Hence, the depth of soil used in storage estimation should be the depth of the surface non-sodic layer.

For crops to effectively remove nutrients, as listed in the above equation, they must be harvested and removed from the site. Where crops and pastures are being irrigated with effluent or where land is being amended with sewage sludge, nutrient contents may be considerably higher, and nutrient removal in the harvest should be monitored to allow management to be optimised.

Contamination of surface water bodies with potassium is not yet strongly linked with any environmental problems. Effluent-potassium should be managed in a similar manner to potassium fertiliser, with the aim of applying effluent-potassium at the rate of uptake by the crop where possible.

In addition to good soil conservation practices, it may be necessary to use vegetated filter strips (VFS) to reduce nutrient-load transport to surface water by run-off. This type of management is appropriate where effluent application areas are close to surface water or gullies (whether permanently flowing or not).

VFS are a strip of dense grass between a nutrient source and the protected area. Research with effluent-phosphorus and many other sources of phosphorus (P) has indicated that VFS can almost eliminate P transport by run-off water by reducing run-off volume and concentration.

At the study sites, phosphorus concentration reductions of at least 78% were achieved (5 m VFS based on flow weighted averages; 40 m slope length), as well as an 80% reduction in run-off volumes (2 m VFS). This translates to reductions of around 95% where both infiltration and particle trapping processes are active, and around 80% under more extreme rainfall events. Similarly dramatic reductions are possible for nitrogen. When designing and managing a VFS, the following should be considered:

Allowable losses refers to gaseous losses, such as nitrogen, and not losses through nutrient leaching. For phosphorus, no safe avenue for losses to the environment exists, as leaching or transport with run-off are the only possible pathways of loss, resulting in contamination of water resources. Gaseous losses of potassium are also not likely to occur.

Considerable nitrogen losses occur in gaseous forms. Managers using spray irrigation techniques should aim to apply effluent at a rate of 140% of the crop's requirements for nitrogen, as this safely accounts for the gaseous losses. Flood irrigation does not allow the same degree of gaseous nitrogen loss to occur, and effluent-nitrogen should be applied at the rate taken up by the crop (given that no gaseous losses occur, and no nitrogen is stored in the soil).

Allowable losses only need to be factored into the equation when calculating nitrogen application rates.

Timing and method of application

Leaching of nutrients, particularly phosphorus, increases when the surface of the soil becomes saturated. This highlights the need to avoid using effluent irrigation techniques that promote surface saturation such as flood or contour irrigation.

Once effluent-phosphorus is sorbed to the surface of the soil, leaching becomes much less important. The first few days after effluent application are critical for the sorption process. Apply effluent when there is minimal likelihood of rainfall within a few days of application. Effluent should not be applied to soil that is wet from previous clean water application or rainfall.

The term 'salt' is used generically to include any dissolved inorganic cations or anions, which contribute to the electrical conductivity of the effluent, manure or soil solution. Salts tend not to be stored in the soil, and the most important means of removal is by leaching. Contrary to the management of nitrogen, phosphorus and potassium where leaching below the root zone is to be avoided, it is actually desirable to leach salts from the root zone to reduce soil salinity. While sandy soils are not desirable for waste re-use due to increased nutrient leaching, more readily leached soils can accept higher salt loadings than heavy clays.

In terms of salt-loading, the volume of effluent or manure that can be applied to soils over the long term, without adversely affecting plant growth, depends on the salinity of the effluent or manure (measured as electrical conductivity (EC) and reported as dS/m). As a rule, applications of effluent with an EC of up to 8 dS/m should have no long- or short-term negative salinity effects. Much more accurate recommendations can be made using computer models such as SALF. Figure 1 represents some of the output of this program. The plotted curves represent a 10% yield reduction for medium tolerance crops such as lucerne, with effluents of either 10 or 15 dS/m. The higher the rainfall, the more effluent you can apply before salinity becomes a problem. For effluents with a high EC, irrigating a mixture of effluent and water may be useful in alleviating the risk of salinity effects.

Figure 2 can be used to determine whether effluent can be irrigated without risk of reducing soil permeability (due to sodium). The plotted lines represent the boundary between the region of decreasing permeability, and the region of stable permeability for the soil textures associated with each curve. 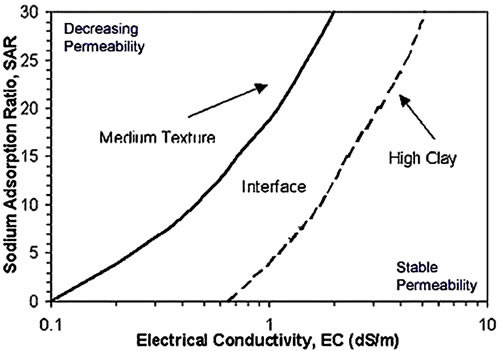 Figure 2. Relationship between sodium absorption ratio and electrical conductivity for irrigation waters that defines the interface between stable and decreasing permeability for three general soil textures.

Where this graph indicates that effluent application will result in decreased permeability, application should not be carried out without remedial action (such as gypsum application), and managers should investigate their operations to improve the quality of their effluent. Gypsum applications at the rate of approximately 5 t per hectare a year, deep tillage and green mulching may alleviate soil structural effects.

Hydraulic loading does not commonly limit effluent application, as nutrients or salts are usually the limiting-factors. Effluent application, however, should be carried out in a manner that ensures that no ponding remains on the soil surface five hours after effluent irrigation. Irrigation should also be managed in a manner that prevents run-off, and spray irrigation is, therefore, preferable to flood irrigation.

Effluent application to land can have beneficial or adverse effects. The adverse impacts of land application, however, may be managed by accounting for inputs, sinks and losses of nutrients, salts, and water.