Considerable advantages can be gained through the use of all-in all-out pig management systems, even within herds of minimal disease status. A key to this strategy, in which groups of similarly aged pigs are protected from contact with older groups throughout their weaning to market period, is the establishment of a batch farrowing system. Instead of sows continually entering and leaving the farrowing room individually, they arrive together to fill an empty farrowing room, farrow within a day or two of each other and leave together after weaning; ready for the room and crates to be cleaned thoroughly before the next group arrives to use the pens.

More efficient use of time and improved pig management may be achieved by dividing your breeding females into groups, each group being large enough to fill the farrowing accommodation, and then synchronising the farrowing within each group. Incorporating an all-in all-out system with batch farrowing has been proven to result in lifetime growth rate increases of 100 g per day and more.

It is not necessary to run a batch farrowing herd as an all-in all-out operation between weaning and marketing, but to do so would help maximise the advantages of both technologies.

Batch farrowing systems will not suit all producers and are probably more suited to the smaller family run herd of 300 sows or less, where time between the busy weeks could be spent with family or working on other enterprises.

It is a system well suited to operating cooperative ventures between producers. For example, three producers may decide that one of their farms should be converted to a batch farrowing unit, another could become a weaner unit, and the third would serve as a grower or finisher unit. This arrangement produces the health benefits and management efficiencies of all-in all-out and multi-siting.

Alternatively, four producers, each with 45 farrowing crates and using the four-week cycle (i.e. weaning at three weeks), could supply a common grow-out site with a month's supply of weaners every week. In effect, the four producers would produce the output of a 1000-sow herd.

Batch farrowing allows you to limit the number of times the pigs are moved, which reduces growth setbacks associated with stress and fighting. Ideally, pigs would only move twice at most; once from the farrowing house into weaner accommodation, and once more into finisher accommodation. If you are worried that weaners going into finisher pens will be too cold during the cooler months, leave some pens empty and raise density in others for a fortnight or so. When the weather permits, weaners should occupy finisher pens or shelters at the stocking rate recommended for their final liveweight (example 0.66 m² per 100 kg pig).

Batch farrowing is also the best way to produce pigs for deep-litter systems, where a group of up to several hundred pigs of equal age might spend its entire growing and finishing period together.

A 28-day batching period is achieved by weaning at around 21 days. If the average weaned sow is mated five days after weaning, and has a 114-day pregnancy, she will farrow 140 days, or 20 weeks after her previous litter was born. This 20-week cycle requires five groups of sows, as seen in Figure 1. Group 1 sows are ready to farrow their second litters four weeks after the first farrowing of Group 5, which fits precisely with the 28-day turnaround period of a three-week lactation followed by one week to clean the room and settle in the next group. 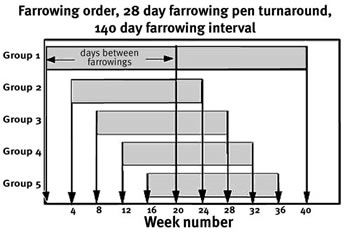 An irregularity will occur with a 35-day farrowing pen turnaround, with an extra week appearing in the system after every four farrowing groups. This extra week is shown in Figure 2. The longer lactation means that only four groups can share the farrowing pens as if there was a fifth group it would farrow just one week before Group 1 is ready to farrow again. It can be seen that the second farrowing of Group 1 (week 21) is six weeks after the first farrowing of Group 4 (week 15), instead of the usual five weeks (four-week lactation and one-week clean and preparation) between the other farrowing groups. This extra week comes along every 20 weeks.

A great advantage of having this spare week is the opportunity it gives to schedule holidays or maintenance. Fixing building structures or fittings can be done without pigs present. The spare week progressively 'moves' from farrowing to market, following the most recent batch of pigs through, enabling maintenance to be scheduled for all production areas.

Number of females in the herd

Each group would contain enough sows and gilts to fill the farrowing accommodation, with an appropriate buffer to allow for returns to service, or unexpected culls. Multiply the number of groups by the number of pens, add a buffer of around 10% and you have your number of female breeders.

However, before deciding the size of the female inventory, the producer must identify the area most likely to limit, or 'bottleneck' the farm's animal movement. For example, you shouldn't use every farrowing pen if your weaner (or grower or finisher) accommodation is not big enough for a full month's worth of weaners (or growers or finishers) arriving at once.

When considering the move to batch farrowing, it is useful to draw a simple pig-flow diagram such as the one below, in order to recognise any physical limitation imposed by your accommodation. This is particularly important if the herd is moving to an all-in all-out system.

Figure 3: Example of a pig-flow diagram.

In the above example, two weaner rooms are filled alternately every four weeks, to ensure that each batch has eight weeks of growth without other batches entering or leaving the same room. After the eight weeks, the batch is transferred to one of three rooms or shelters for their remaining 12 weeks.

Where separate rooms, sheds or shelters are unavailable, partition the area to create separate air spaces; this has proven to be of benefit to health and growth rates.

Getting them cycling together

Initially, each group of females must be carefully managed to ensure synchronous farrowing. This can be achieved in several ways, some of which will involve your veterinarian: Figure 4: Weaning two weeks of sows together at one weaning and again at the next, produces one batch.

The farrowing interval should allow for how much time you can devote to piggery operations. The longer the lactation period, the greater the interval between the busy one-week periods that involve weaning, cleaning, oestrus detections/mating and new farrowing. A three-week lactation would suit producers dedicating most or all of their time to a piggery operation, while a four week or later lactation would better satisfy the producer who has other enterprises to run apart from the piggery, or who just prefers to wean at a heavier weight.

Weaning on Thursdays will generally result in re-mating on Monday or Tuesday of the next week, with most of the resultant farrowing taking place between a Tuesday and the following Thursday. This allows weaning to take place on a Thursday a number of weeks later.