Pastures for horses on the Darling Downs 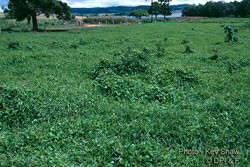 Horses for breeding, racing, trotting and leisure are an important part of the rural scene on the Darling Downs. Horses cannot efficiently digest large amounts of coarse fibre, and so graze very selectively.

They prefer short young pasture, avoiding the more fibrous mature growth that often abounds in the taller native and introduced grasses, particularly after flowering. However, some native species, such as Queensland bluegrass, are ideal for horses.

Hay and grain concentrates are normally fed whenever paddock feed is short, pastures are frosted or when animals are preparing for high performance activities.

Dryland pastures suitable for the major soils are described below.

The friable red soils along the edge of the Great Dividing Range, as seen around Toowoomba, receive an average annual rainfall of 950 mm.

The basaltic uplands cover a belt 30 to 50 km wide sloping west from the Great Dividing Range. Rainfall declines rapidly away from the range to an average of 650 mm in the west. The uplands combine creek flats, undulating plains and low hills with steep slopes. Soils are shallow, brown to grey clay-loams on the upper slopes graduating to deeper, heavier, darker grey to black alkaline cracking clays in the valleys.

The flat alluvial soils of the central Darling Downs plain consist of grey to black, medium to heavy alkaline cracking clays. They have good fertility and water-holding capacity, and are more commonly used to grow crops than pasture. Pasture species suited to this type of country are similar to those sown on the heavier clays in the basaltic uplands.

If more than one grass or legume is used in the pasture seed mixture then the proportion of each may vary according to seed cost, method of sowing or a desired expectation of species composition in the established pasture. The usual seed mixture is 2-3 kg of grass to 2 kg of legume.

All legumes should be inoculated with an appropriate strain of inoculum before sowing.

Summer grasses can be sown from October to late February. If planting in early spring be aware that even though evaporation is lower, weed competition at this time can be detrimental to young pasture seedlings. Mid summer planting (January to February - the wettest months in Queensland), when there is a higher probability of receiving consecutive rain days, has the best chance of success. It is also the most likely period to receive good follow-up rain after planting.

Lucerne, annual medics and clovers establish best in autumn (April to June). Alternatively, medics may be sown with a winter grain crop in the previous year, and allowed to regenerate naturally amongst the sown grasses.

Best results are obtained from a prepared seedbed that has been fallowed for moisture and nitrogen accumulation and for weed control. The surface 50 mm should be fine and firm. The odds of establishing a pasture improve if the sub-soil moisture is good at sowing. Depending on soil depth aim for a minimum of 40 cm of wet soil under the seedbed. Rougher seedbeds with less soil disturbance need a higher seeding rate and give less reliable results.

Legume seeds, especially medics, can be oversown into a pasture without soil disturbance. Grazing in autumn will reduce mature grass cover and seed broadcast at this time will be trodden into the soil by hoof action. Although a single pass with a chisel plough or scarifier may improve germination by providing a better seedbed, it is often cheaper to increase the seed rate. Oversown summer grass seedlings do not readily establish against the competition from existing pasture plants.

Pasture establishment is most reliable when seed is broadcast onto the dry surface of a fine firm seedbed or drilled into its surface with precision planters. Small seed should be within the first 5-10 mm of the soil surface.

Seed-soil contact may be improved on non-crusting soils by rollers or presswheels that will firm the soil around the seed. If harrowing after sowing it is important that small pasture seed should not be buried by more than 5-10 mm of soil or the shoot might not have the energy to emerge and establish.

Sowing dry ensures that pasture seed is in the right position to take advantage of the next rainfall to start germination. The seed must remain in close contact with wet soil for about 3-4 days to establish a seedling. Sub-soil moisture should sustain the seedling until follow-up rainfall occurs. This rain will also promote the development of secondary roots. This allows the crown of the establishing plant to develop.

Pasture seed in the bottom of shallow tine furrows or small depressions in more roughly prepared seedbeds are more likely to establish seedlings because they accumulate water and stay wetter for longer after rain.

A soil analysis will indicate major nutrient deficiencies before planting.

A good fallow should release enough nitrogen to allow the grass to establish.

Phosphorus is unlikely to be a problem on clay soils, but apply superphosphate to the seedbed if a soil analysis or past history indicates a deficiency of phosphorus. Superphosphate supplies both phosphorus and sulfur.

Sulfur deficiency is common on upland soils. A single application of 60 kg/ha sulfur will last 2-3 years.

Annual maintenanceNitrogen is supplied most economically by maintaining a strong legume component. It is usually uneconomic to fertilise large areas of dryland pasture. Renovation of mature pasture that is showing signs of decline will release nitrogen trapped in leaf litter on the soil surface and rejuvenate it for a short time.

Lucerne and medics require sulfur and phosphorus for good production. Topdress with superphosphate per year if phosphorus is low, applied in early spring or early autumn. If only sulfur is deficient, apply elemental sulfur or gypsum every 2-3 years.

After establishment most broadleaved weeds should be suppressed by a dense vigorous growth of pasture. Although it is generally impractical to use herbicides for broadleaved weed control a number are registered for this purpose. If used care should be taken in their selection to avoid killing useful pasture legumes. For further information on herbicide selection consult your company agronomist.

Woody weeds in young pasture can be suppressed by slashing before they seed, preferably after the pasture plants have set their seed.  At a height of 30-40 cm it leaves the grass intact. Timber regrowth may need selective herbicide treatment.

The key to managing all pastures is in applying an appropriate stocking rate and rotationally grazing or spelling. However, the selective grazing habit of horses often results in heavily grazed areas in paddocks that become weedy.

Annual spelling of native grasses during their flowering and seeding will maintain good pasture condition.

Avoid grazing until follow-up rain allows pasture plants to develop a strong root system and set some seed. Do not overgraze before winter. Short periods of grazing are preferable to continuous stocking.

As horses prefer eating young foliage to mature leaf and stem, they overgraze some areas while leaving others tall and rank.

Pastures containing lucerne must be grazed rotationally. Rotating the grazing, and slashing after each grazing, will help maintain leafy growth. Alternatively, grazing cattle in with horses, where the cattle will eat the taller growth, may reduce the need to slash.

Plants with a prostrate growth habit (kikuyu, paspalum and white clover) can be grazed closer to the ground without damaging their ability to regrow, but tussock grasses should not be grazed below 10 cm before spelling.

A pasture based on summer grasses will not provide good feed for horses throughout the year. Feed gaps will occur in winter, when cold weather and frosts slow or kill pasture growth, and in summer if rainfall is low or erratic. Feed supply is normally maintained by filling these gaps with winter or summer forage crops and by hand feeding hay or grain.

The symptoms of 'big head' disease (Osteodystrophia fibrosa) are affected gait, poor performance and swelling of bones of the head. It is seen mostly in horses grazing pure buffel grass in western Queensland, and is not common on the Darling Downs because of the wider range of pasture species available.

Big head is a calcium imbalance caused when horses graze exclusively on grasses containing high levels of oxalate; that locks up calcium making it unabsorbable by the horse's intestine.

Many introduced grasses contain oxalate. Setarias (purple pigeon grass has about half the oxalate content of other setarias) and buffel grasses contain the highest levels of oxalate followed by kikuyu, pangola and panics. Grasses with lower or zero oxalate content are Rhodes, creeping bluegrass, couch, paspalum and many native grasses.

Mixing legumes (lucerne, clover, medic) with any high-oxalate grass in a grass/legume pasture will help to correct a calcium imbalance, while feeding calcium is also effective.