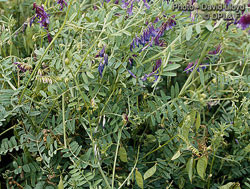 Vetches are winter-growing legumes that can provide beef and dairy producers with a means of improving animal performance during winter. They are worth considering in situations where soil nitrogen levels are low and you may be reluctant to use heavy rates of nitrogen fertiliser on oats or other winter cereals.

The vetches have a number of advantages over other fodder crops. These include:

A range of different vetch species are available to producers. Each of these have very specific management requirements that need to be carefully matched up with the growers requirements (i.e. the production system being used, planting time, and soil type).

While vetch is regarded as drought-tolerant it will defoliate under severe moisture stress. All the vetches are moderately frost sensitive and seedlings can be cut back severely by heavy frosts.

May-June has traditionally been the main planting time when planting vetches for either forage or grain. Purple vetches such as Popany can either be sown in March for winter grazing, or in May for spring grazing.

Seeding rates vary from 3-10 kg/ha. The heavier rates are preferred when sowing a pure sward for forage. Seed should be treated with Group E inoculum. Lime pelleting is recommended when planting into acid soils below pH 5.5.

It is very important to use grazing to avoid situations where you have very rank growth during late winter (July-September). Rank, vegetative crops of Popany and common vetch (Morava) are extremely susceptible to botrytis grey mould. This foliar disease can devastate a crop in a matter of weeks.

Management should aim at allowing the vetch to seed down in the establishment year, in order to build up reserves of hard (dormant) seed in the soil. Subsequent spelling every second or third spring is advisable to allow the seed reserves to be maintained. Namoi does not persist under continuous, uncontrolled grazing by sheep or goats, or on hard setting soils such as traprock or fine-grained sandstones (except where they are periodically cultivated).

A well managed stand can produce between 200 and 600 kg/ha of seed. While Namoi can be harvested with conventional equipment, crop lifters are often necessary. Sowing the vetch with 15 kg oats/ha will help lift the vetch off the ground and aid harvesting.

Vetch hay is nutritious (16-20% protein), highly palatable and preferred by livestock. Slashers or rotary type mowers are preferred for hay making operations. Conventional cutter-bar type mowers are not suitable as they are prone to blockages from the vining growth.

Vetches are not suited to close grazing. They are climbing plants, with their growing points situated well above ground level. The type of grazing management required will largely be governed by whether the vetch is sown by itself, or in a mix with cereals such as oats.

Namoi is not highly palatable to cattle, and in a mixed sward the cattle will normally graze the grasses and broadleaf weeds in preference to the vetch. Stricter grazing management will be required where Namoi is sown as a pure stand however, in order to prevent overgrazing and damage to the vetch.

Namoi should not be sown in cropping country because of its hard seed levels and ability to regenerate in cereal crops for years after.