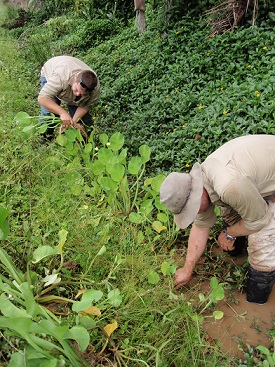 The program targets eradication of the following species:

Limnocharis, miconia and mikania vine are all considered serious weeds in other countries, while Miconia nervosa and Miconia racemosa have exhibited invasive characteristics in North Queensland.

The program is managed by Biosecurity Queensland, a business unit of the Queensland Department of Agriculture and Fisheries. Funding for the program is shared nationally with contributions from the Australian, Queensland, New South Wales, Northern Territory and Western Australian governments.

These weeds are classified as pest plants under Queensland legislation and it is a serious offence to introduce, keep or sell these weeds without a permit issued by Biosecurity Queensland.