Bruguiera gymnorhiza (orange mangrove) belongs to the Rhizophoraceae family and is widespread across northern Australia. It ranges along the east coast from the Clarence River in New South Wales to Cape York and west to Darwin in the Northern Territory.

This species prefers firm, well drained, muddy soils that experience only a few high tides each month. It is often the most landward of mangroves and is common in areas subject to freshwater influence, such as brackish reaches of tidal streams.

Orange mangrove reaches up to 20 m. Its key feature is its knobbly, bent knee-shaped pneumatophores that are involved in gaseous exchange. These roots develop from the underground root system and protrude through the soil surface at intervals.

The bark is fissured, rough in texture and grey-brown in colour. Buttressing is sometimes present at the base of the trunk.

Large leaves grow to 20 cm long and 7 cm wide. They are smooth, thick, elliptical in shape and arranged in opposite pairs on the ends of branches. The upper leaf surface is glossy and dark green, while the underside is paler green.

The leaf stalk is tinged with red and flowers appear at the base of the leaves. 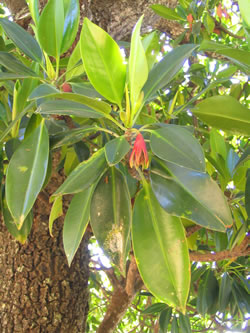 Flowering occurs throughout the year, with single-seeded fleshy fruits appearing from August to February. Seeds suspend vertically beneath a red, cup-shaped flower.

After germinating and falling from the tree, the seed floats to be dispersed by the movement of the tides.

This species excludes sea salt from its roots as seawater is taken up. Although some salt is taken up, it is removed as it accumulates in the leaves that grow old and fall from the plant.

The timber is hard, durable and yellow. It is commonly used overseas in the construction of houses, boats and fish traps. Other uses include firewood and tanning fish nets. The fruit is edible once cooked.