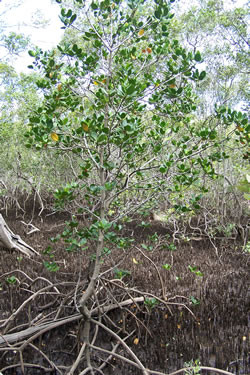 Red mangroves have distinctive prop roots which support the main trunk and assist with gas exchange.

Rhizophora stylosa (red mangrove) is a common species of the Rhizophoraceae family. Its range extends across coastal northern Australia from the Richmond River in New South Wales to Shark Bay in Western Australia.

Red mangrove forms extensive, often pure stands around the shores of shallow protected bays, estuaries and inlets. It prefers soft, well drained muddy soils. It also establishes on rock or coral-based sandy soils and is a dominant species of lower tidal mangrove forests. It is commonly seen along the lower tidal reaches of rivers and immediately behind the seaward fringe of mangroves, sometimes with grey and yellow mangroves.

Red mangroves in North Queensland may grow to 20 m high, though trees of 4 to 5 m are more common elsewhere. The main trunk is erect and covered by rough, reddish-brown bark.

Stout, large arching prop roots are characteristic of the species, which support the main trunk and contain numerous lenticels (air pores) on their surfaces. The lenticels are air-filled spaces that connect with underground root structures. Aerial roots growing from the tree´s limbs also help the plant breathe. These do not take root even after reaching the soil and are produced by lower branches.

Leaves are oval-shaped, thick and leathery, and may reach 15 cm in length and 6 cm in width. They are dark green with numerous small, reddish-brown dots on the lower surface and a small deciduous pointed tip. Small, creamy-white flowers occur in branching pairs while the leaves are arranged in opposite pairs on the stem. Red mangrove propagules grow up to 30 cm in length before dropping from the tree.

Flowering occurs in winter, with the production of a single-seeded, brown, oval-shaped fleshy fruit during summer.

Seeds germinate on the tree (vivipary), which results in the appearance of a long, green, rounded propagule (seedling) about 30 cm long. The propagule protrudes through the wall of the fruit to hang vertically beneath it. This buoyant germinated seed is the first stage of the root system.

Rhizophora mangroves eliminate salt at their roots as water is taken up. Excess salt that finds its way into the plant is stored in the leaves, and removed from the plant when the leaves die and fall from the tree.

Red mangroves provide essential habitat for Queensland wildlife and marine species, such as barramundi and mud crabs. The hard timber is used in construction in some South East Asian countries. The bark has also been used for tanning nets.