Protection and management of marine plants 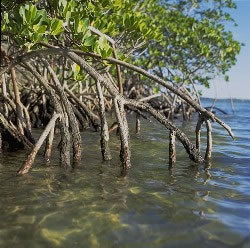 Marine plants such as these mangroves are protected in Queensland

Heavy penalties apply to any unauthorised disturbances that impact on marine plants. Protection also applies to all marine plants, no matter where they grow (i.e. on all private and public lands).

Marine plants grow on or adjacent to tidal lands. They include mangroves, seagrass, saltcouch, algae, samphire (succulent) vegetation and adjacent plants, such as melaleuca (paper barks) and casuarina (coastal she-oaks).

Marine plants, as well as rocky foreshores, mud flats, reefs and sand bars, are a fundamental part of marine fish habitats in Queensland.

These habitats provide shelter, food and nursery areas, particularly for estuarine dependent species. Marine plants and marine fish habitats more generally are a vital natural resource that help to sustain fish for the future for commercial, traditional and recreational fishing.

Please play your role in protecting these important fish habitats for the future.

Marine plant protection applies to all land tenures, including private, leasehold or public lands, and whether the marine plants are alive or dead.

Coastal residents and landholders must apply for prior approval to undertake certain activities, such as building a jetty, that require them to cut, trim or remove mangroves or other marine plants.

All developers must ensure they have the correct approvals prior to undertaking works near tidal areas, including all earthmoving contractors, geotechnical and biological consulting companies, energy suppliers, road contractors and local governments.

All development activities that are not self-assessable require approval before work starts.

For work in a declared fish habitat area, a resource allocation authority is required under the Fisheries Act 1994, as well as a fisheries development approval under the Sustainable Planning Act 2009.

Fisheries Queensland has several policies and guidelines that outline how protected marine plants are managed and when approvals may be required.

The Data collection protocol (PDF, 169.7KB) has been developed for mapping and monitoring mangrove communities in Queensland. The protocol was developed as an outcome of the working group established to investigate the mangrove dieback in Moreton Bay. One issue in determining  the extent of the problem was the different reporting and monitoring methods used for studies undertaken on mangrove communities. The Mangrove Data Collection Protocol has been developed for use as a statewide standard of data points for future survey, monitoring and mapping works.

Mangrove communities are exhibiting dieback from natural and human-related causes throughout Queensland. In Moreton Bay, areas of mangrove dieback have been noted for at least the last 20 years.

Mangrove dieback can occur for a number of reasons. These include changes in weather, insects and disease, higher levels of nutrients and/or pollutants, impacts from climate variability and population increases. More information about the causes of mangrove dieback is available on the Department of Environment and Science website. A set of conceptual models have also been developed that illustrate artificial and natural causes of mangrove defoliation and  death and the process that goes on in the mangrove community when these are impacted by dieback events. These conceptual models can be found on the OzCoasts website.

Dr Norm Duke of The University of Queensland was commissioned by Fisheries Queensland to provide cost-effective mapping of mangrove dieback and sinking centres in the Moreton Bay region. The report is based on the specific methodology described and employed, supported by limited groundtruthing. The report findings highlight the key issue of dieback in the mangrove communities within Moreton Bay and the risks, real and potential, to the fishing industry and the marine environment that the loss of mangrove communities pose. Fisheries Queensland acknowledges the results of the report and the need  for further research and ongoing mapping and monitoring.

Of the combined survey bank length of 113.4 km, mangroves were present over 82.3 km (73%) prior to the January 2011 flood, along both banks of the Brisbane River from Breakfast Creek to the Bremer River.

The January 2011 flood had, as at June 2011, resulted in the death, destruction or partial destruction of 76 km of mangroves along the Brisbane River. This loss represents 92.4% of the mangroves prior to January 2011. It is expected that as the impacts continue to have an effect, approximately 95% of the mangrove community between Breakfast Creek and the Bremer River will have been lost by December 2012.