Spanish mackerel in the Gulf of Carpentaria

This fact sheet provides current results from the biological monitoring of Spanish mackerel in the Gulf of Carpentaria. This data was used alongside other available information to assess the status of this biological stock which is currently defined as sustainable.

Spanish mackerel (Scomberomorus commerson) are a highly valued species, targeted by recreational and commercial fishers alike throughout Queensland. Populations within the Gulf of Carpentaria (GoC) are a separate biological stock to populations along the east coast. GoC and east coast populations are monitored and managed as independent fish stocks to manage them effectively.

Fisheries Queensland has conducted biological monitoring on line-caught Spanish mackerel for the east coast annually since 1999 and for the GoC since 2007. The focus of this long-term fishery monitoring is to collect information on the length, sex and age of Spanish mackerel caught by recreational and commercial fishers. By conducting routine biological monitoring each year, long term trends in the length and age structure of the stocks can be identified.

Fisheries Queensland uses a national stock status assessment framework to routinely determine the status of individual fish stocks. Biological data, together with catch and fishing effort information is collated and assessed by a panel of scientists and managers against clearly defined criteria to determine the exploitation status of the stock.

The fishery monitoring program has sampled over 16 000 Spanish mackerel within the GoC since 2007. On average this is approximately 10 per cent of the line caught fish within the commercial fishery each year.

Recreational harvest estimates for this region are uncertain and therefore the proportion of recreational fish sampled by the program is unknown.

Age: Otoliths (ear bones) provide fisheries biologists with a record of seasonal growth for each individual fish. By examining otoliths under a microscope, the age of the fish can be reliably estimated (Figure 2). Age information is important in fisheries assessment because it provides an age structure of a stock each year. Over time this can highlight particular year class strengths that may indicate recruitment success and also to identify recruitment failures that may be of concern. 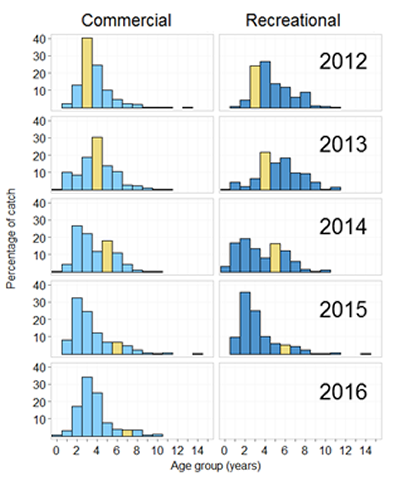 What is the sex of your fish?

The sex of Spanish mackerel can be determined through examination of their reproductive organs, otherwise known as gonads. Mature males have solid white testes, while mature females generally have hollow, pink or orange coloured ovaries (Figure 3).

Spanish mackerel are considered to have an initial rapid growth rate, and females generally grow faster than males. Females therefore tend to be younger than males of the same length (Figure 4). The graph below can be used to estimate the age of Spanish mackerel caught within the GoC. For example, a female with a total length of 107 cm is typically three years of age with a 90 per cent likelihood of it being between the ages of two and five. Fisheries Queensland would like to thank everyone who has donated fish frames or assisted with the collection of data for monitoring Spanish mackerel in the GoC. Your ongoing assistance helps to ensure that the collection of length, age and sex information is representative of the commercial and recreational fisheries during each season.