The future of profitable commercial and enjoyable recreational fisheries relies on our natural resources being used in a sustainable way. This requires keeping a close eye on fish stocks and the performance of management arrangements for each fishery. By routinely collecting and assessing information from commercial and recreational fisheries, we can make objective decisions to ensure the future of our resources.

The sustainability of Queensland fish stocks are assessed using the Status of Australian Fish Stocks framework, a nationally agreed stock status classification system.  A weight-of-evidence approach assesses the available biomass and fishing pressure indicators using catch and effort information from commercial and recreational fishers, along with available scientific data and biological information gathered by this program. The stock status of king threadfin was assessed nationally in 2016 and 2018. Queensland’s Gulf of Carpentaria stock was assessed as ‘depleting’, due to the reduction in biomass over time and changes in the sex ratio within size classes and age structure. The east coast management unit of king threadfin (multiple genetic stocks) were evaluated as ‘sustainable’.

Biological monitoring of king threadfin was identified as a priority due to concerns raised during the stock status process and a fishery-dependent monitoring program commenced in late 2015. The program aims to collect representative length information from commercial and recreational fisheries and determine the sex and age structure of the harvested fish.

King threadfin are caught primarily by indigenous, recreational, and charter fishers by line and by commercial fishers using set mesh gill nets. In 2018 the Queensland commercial harvest of king threadfin was 98 tonnes from the east coast and 235 tonnes from Gulf of Carpentaria waters.

Risks to the sustainability of the king threadfin fisheries have been identified, including low release-survival rate, variable growth and late female maturity (Welch et al. 2010, Moore et al. 2017). River flows affect the king threadfin fishery, with low flows associated with both lower catchability and a reduction in the number of young produced and/or surviving (Halliday and Robins 2007).

In Queensland’s Gulf of Carpentaria, drought conditions and a decrease in commercial fishing effort have contributed to the decline in commercial catches since 2010. Research has also identified changes in the age and sex ratio composition of the catches recorded in 1986—1990 and those from 2007—2009 (Moore 2017). The more recent catches contained a greater proportion of younger and smaller fish, and observed a reduction in the size and age when male fish transition to female.

The Queensland east coast genetic stocks are small geographically and therefore vulnerable to local depletion (Welch et al. 2010). However, commercial and recreational catches on the east coast increased in southern and central Queensland, after the floods in 2010/11 and following years of higher than average rainfall.

This sampling methodology was developed from a trial program conducted in 2015. From January 2016, data has been collected from commercial catches from the Gulf of Carpentaria and areas of the Queensland east coast (Map 1). Length and sex of fish caught in the commercial fishery are recorded. Otoliths (ear bones), are also collected, so the fish's age can be estimated by counting the annual rings using a microscope.

The lengths of recreationally caught king threadfin are recorded as part of Boat Ramp Survey program, particularly at boat ramps between Cooktown and the Gold Coast, and in Weipa and Karumba. 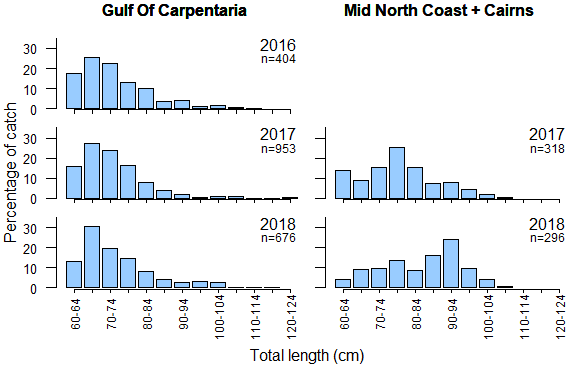 Graph 1. Length frequency of commercial harvested king threadfin for the Gulf of Carpentaria and the combined sampling regions of the Mid North Coast and Cairns. Map 1. Regions where king threadfin is monitored from commercial catches

The monitoring program for king threadfin relies on community involvement through voluntary participation from commercial fishers, seafood processors and recreational fishers. Thank you to everyone who has been assisting with the collection of data on king threadfin. This biological monitoring will provide important information for assessing the status and managing stocks in Queensland into the future.