Yellowfin bream form a single stock along Australia’s east coast and are commercially and recreationally exploited throughout their range. Fish from the commercial sector supply the domestic fresh fish market, with an average annual harvest of 120 tonnes since 2010. Yellowfin bream are among the most popular fish harvested by recreational fishers in Queensland and New South Wales, with an estimated harvest in 2014 of 125 tonnes and 330 tonnes respectively.

The current monitoring program began in 2007 and is focussed on the southern part of the state, between Baffle Creek (north of Bundaberg) and the Queensland–New South Wales border. It aims to investigate the length, sex and age of fish harvested by commercial and recreational fishers. In Queensland, similar data was collected routinely for yellowfin bream in the mid 1990s and their basic biology was determined through short term research projects dating back to the 1970s. The data contributes to stock assessments and evaluations of current fishery management. Yellowfin bream are currently assessed as sustainably fished. 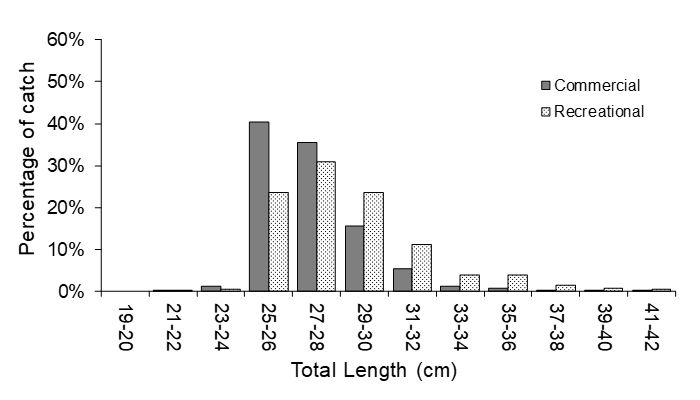 The age of many fish species can be determined by examining their otoliths (ear bones). Fish age, in years, can be estimated by identifying and counting the number of opaque bands, like growth rings in a tree. Each year, 250–300 yellowfin bream otoliths are examined to determine their age. The age is analysed along with fish lengths from the same year to determine the percentage of fish in each age group within the yellowfin bream harvest (also referred to as the age structure of the harvest).

Yellowfin bream can live for more than 15 years, but they are most commonly harvested between five and nine years old (figure 2). An interesting biological fact about yellowfin bream is that most fish change sex, from male to female, during their life. This is referred to as being "protandrous".

Yellowfin bream sometimes have an abnormal dorsal fin and profile (image 1). This is known as saddleback syndrome and opinion differs between researchers as to the cause of the problem. Some believe pollutants are the cause, but testing by Queensland Health in 2009 showed these fish are safe to eat.