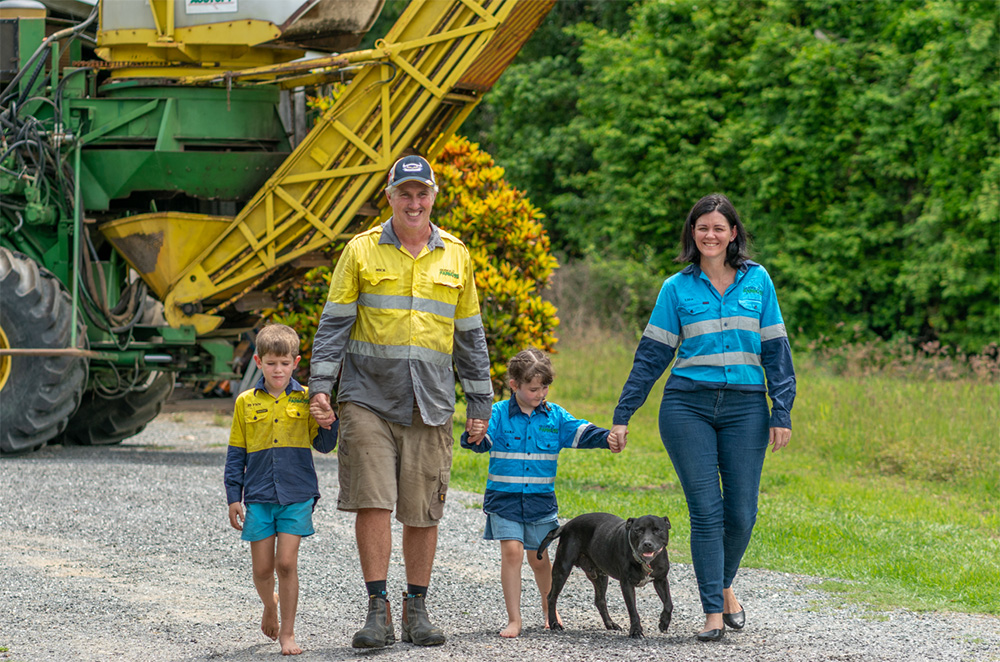 The Giudice family outside the farm
© Queensland Government

Some people might regard Liza Giudice as a maverick, a woman treading paths thought only for men. Certainly she is a rare woman holding down a directorship on Far Northern Milling after a similar stint with CANEGROWERS Mossman.

Did we also mention Ms Giudice is a mum to Flynn and Zara. And that's not even the half of it.

She helps guide a successful family business with operations either side of Cairns in Silkwood and Mossman with husband Michael. She and her hubby have been at the forefront of the Smartcane BMP program (the sugarcane industry standard run by CANEGROWERS and endorsed by the Queensland Government) which, in short, fosters best practice farming.

Outside the boardroom Ms Giudice, naturally enough, is deeply engaged in helping run the family business, which is an unashamedly environmentally sustainable activity with hundreds of hectares across five farms - Mowbray, Missingham, Newell Beach and Noli in the Mossman region and Silkwood at Innisfail.

They were early adopters of the Smartcane BMP scheme, securing accreditation and working behind the scenes to inform industry colleagues and have just received their 5-year re-accreditation for both Silkwood and Mossman areas.

"In the beginning I was actually going around and helping a few farmers to implement the paperwork to show them how easy it was," she said. "I wanted growers to be aware of Smartcane because having accreditation is going to be dollars farmers will perhaps see in the not-too-distant future.

"International sugar manufacturers and other big companies are looking at Smartcane and comparing it with what they consider as sustainable farming. Growers are looking after the Great Barrier Reef and the land and that's part of what Smartcane was initially all about. It was about showing everybody that farmers are in the 21st century and are doing the right thing.

"It tells the consumer that exported sugar from Australia, for example, is sustainable, clean, green and worthwhile and we as farmers we are doing everything we can to look after the land."

The Giudices have moved from traditional practices and disc rows and rather than ploughing the entire paddock are moving to wider spacing as well as a means of protecting the soil and crop.

"We're not at the forefront but we're evolving and moving with the times," she said. "Michael and I have changed our farming habits over the last eight years with a whole range of practices and we have been moving our row spacings by going out to 1.8 instead of 1.65 metres.

"Bigger machinery that's now on the market tends to suit wider spacing and doesn’t fit in between smaller rows so the wider spacing saves running over the stools."

As well, they grow bean crops, that get ploughed in to inject additional nitrogen and organic matter back into the soil.  They purposefully keep some sections fallow to relieve pressure on the farmland and to remove pest and disease.

"I think fallowing is very important and I guess if you're not ploughing the whole paddock and only the ground where the stool sits then you are saving your soil. The land has given us income and it's only fair to give it the right attention and Smartcane is an important tool to make it happen," she said.

Liza dismisses the notion she is a pioneer for women in cane but embraces the thought of more women taking a greater presence, either by helping to run their family enterprise, or at official level.

“I don't think that there are many women on Boards in the sugar industry. "I love to teach people and teach women about I the sugar industry, from growing the cane, milling the cane all the way through to selling the sugar it is complicated and there are many moving parts to it. As well as that it is because it's my livelihood and it's other women’s livelihood, too, and I’d like to see that they have some control of their own destiny. "To be able to understand the industry it can help to make decisions on the farm or financially gives people independence, especially women, and I think that is important." "I have been excited by the opportunities I've had," she explained.

“I enjoyed every moment at CANEGROWERS Mossman and now the Far Northern Milling Board, so much so that I want to sit on other boards," she said. "I'm more on the financial side, so I like to look at a set of books, or a set of financial records and go through it, ask the questions some people might not want to ask so that I can relay the information so that others can understand more.

"I want to ask those questions because at the end of the day, especially if it's an organisation that growers are paying into, you have a clear understanding of what that organisation is doing for your investment."

"Initially when one of the board directors of CANEGROWERS Mossman asked whether I would be interested in sitting on the Board I said yes. I was on that CANEGROWERS Mossman board for two and a half years. During those years I was also the Company Secretary for a Cane Productivity Board

"I did some courses in Brisbane and this really helped me on the path of knowing how a board should run and the responsibilities that come with being a company secretary and board director.

"I have been learning about the industry for 12 years, but I still have a long way to go. I love the industry. It's what I want to do, it's where I want to be. At Far Northern Milling we have Chairwomen and a female CEO which gives me a fantastic set of mentors within the board room and industry, and I'd love it if there were more women in the industry generally.”

Liza is delighted that FNM is involved in the Daintree Bio Precinct Ltd, which is working to attract environmentally sustainable bio-projects to land adjacent to the Mossman Mill and provide long term security of Mill feedstock such as sugarcane, syrup, sugar, bagasse and molasses) as well as utilities such as power and steam.

To find out more about the implications of moving to innovative farm practices, call the Department of Agriculture and Fisheries on 13 25 23 or visit Farming in the Great Barrier Reef catchments.