Meet Sam and Santos Lamari, sugarcane farmers who work with the environment for best results 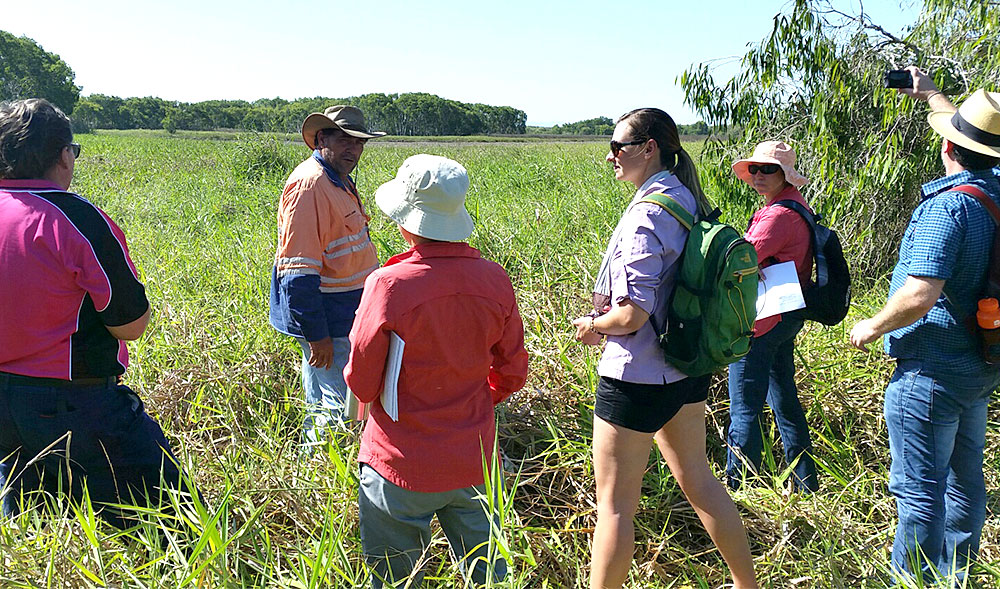 Members of the community and project group looking at the wetlands after the successful restoration.
© Queensland Government

As boys, Santo and Sam Lamari loved exploring the 40 hectare wetland area on their family's cane farm and they took notice of the thriving wildlife about the place.

"As kids, we saw ducks, geese, swans and other birdlife, whereas when we got older the wetlands had become covered in weeds, and there was no wildlife there at all," Santo said.

They decided to do something about it, taking a proactive approach to reclaim the wetland through environmental management. This has also provided bonus dividends for their farming operation.

The brothers have 170 hectares under sugarcane across two farms, located 26 kilometres south of Ingham. They average about 11,000 tonnes of cane per year, which is sent to the Victoria Mill.

Cattle once controlled the para grass and hymenachne, which had since infested the wetland. Since the removal of livestock, invasive pasture grass weeds have choked the wetland system, which had also become a haven for feral pigs. After several rounds of baiting and trapping, Santo and Sam attended a Department of Agriculture and Fisheries (DAF) field day on weed control and were inspired to begin a collaborative approach to tackle the weeds and restore the wetlands.

Santo and Sam partnered with local Indigenous groups, DAF, researchers, Terrain Natural Resource Management and other environmental groups, resulting in the Insulator Creek wetland restoration project. A ‘burn-spray’ method was used to control weeds and encourage natural regeneration of native species in the wetland on their farm. This involved a controlled fire after the wet season, when the soil is moist, to remove the bulk of the weed biomass and stimulate native grass seeds. Selective herbicides were then used to kill any emerging weeds. The process needs to be repeated for three to five years until the area is covered by 60 to 70 per cent native species. Ongoing spot spraying is then required to keep weeds in check.

The project was assisted through funding from the Queensland Government's Everyone's Environment Grant. As well as improving the control of weeds, the Lamari brothers have seen other benefits.

"By tackling the weeds we have actually improved our drainage system. The streams now have a clear way to the wetlands," Santo said.

Terrain Natural Resource Management has recently installed a fishway on the creek near their farm to help fish life movement. A pipe culvert causeway crossing has been replaced with a concrete bed-level crossing, and a fish ladder has been added further along the creek as part of the Fish Homes and Highways project being delivered by Terrain NRM and funded by the Australian Government's Reef Trust.

There are signs of wildlife returning to the wetlands. A neighbour to the Lamaris has reportedly seen a small crocodile in the creek.  Santo joked that he wasn't sure if "that's a good thing or a bad thing" but it did show the ecosystem was working.

Tackling the weed problem is not the only way the brothers are improving their farming while also helping protect the Great Barrier Reef. About six years ago they adopted wider row spacings of 1.8m and started to work in zones, meaning machinery traffic is kept to a minimum in order to improve soil looseness and minimise soil compaction in the growing zone, increase biodiversity, such as earthworms, leading to better yields.

"We try to plant legumes every year, weather depending. We are finding that helps the ground," Santo said.

The Lamaris have long had a saying to ‘never knock the person who is doing something different’.

"Farmers are very hesitant about changing; I've done it that way, it works for me. But sometimes you've got to look at it and ask, why did he change?" Santo said.

"Every farmer has got his ideas. He's not wrong and I'm not right. We all think differently and it’s good to try to do something differently, if you can see improvements need to be made."

It was that attitude that sparked some renewed thinking for the brothers.

"For us, change came from looking over the neighbour's fence; he was growing just as much cane as us, but with less rows, so we gave it a go," Sam said.

A more recent trial has seen the use of mill mud on their paddocks to further improve soil structure and reduce fertiliser use. Being a considerable distance from the mill, the cost to transport the mill mud needs to be weighed up against the savings to be made. However, results from a trial paddock have suggested it would pay off.

"It's a poorer farm but it's the best crop we ever cut off that paddock, so that's something we'll be looking at in the future," Santo said.

WITH their special situation of having four different environments (mangroves and salt marshes, freshwater wetlands, native bushland and farming land), the Lamari farms have been the focus of other university studies looking into greenhouse gas (GHG) emissions from those different environments.

The brothers were also involved in Project Catalyst which aims to support sugarcane growers to adopt sustainable farming practice changes, and improve the quality of waters impacting the reef. The project saw them use electromagnetic (EM) mapping in conjunction with green manure fallow cropping to better manage their sodic soil issues.

Santo and Sam have welcomed the opportunity to get inside research projects and environmental improvement tasks.

"By having people like DAF and universities involved, and Terrain and our local NRM groups, you get an understanding of different solutions that are available to improve farming practice," Santo said.

"One thing that I've picked up from all of this is that when you meet other growers that are into it too, you can share ideas from up and down the coast."

"We have to live with the environment," Sam said.

"We are farmers and at the end of the day we have to look after our farm environment just as much as the natural environment."

To find out more about the tools and services DAF offers to primary producers on best practice adoption, and events in your area, visit Farming in the Great Barrier Reef catchments.