Shark control equipment is used to catch and reduce the number of potentially dangerous sharks near Queensland beaches. Shark nets and drumlines (baited hooks) are currently used to catch sharks passing through an area that could pose a threat to beach-goers. The equipment lowers risk, but does not provide an impenetrable barrier between sharks and humans.

We recommend you swim at patrolled beaches that have shark control equipment in place.

Nets do not prevent sharks from entering a particular area. They're intended to catch 'resident sharks' and sharks that pass through the area while feeding on bait fish.

The Shark Control Program's (SCP) large mesh nets are designed to target sharks over 2 metres long. The SCP aims to reduce the number of potentially dangerous sharks in particular areas rather than create an impenetrable barrier against shark attack.

Fisheries Queensland's net specifications are 186m long, a depth of 6m, and a mesh size of 500mm.

The nets are set adjacent to the shoreline according to the prevailing tides and currents. The topographical features of the area and sea conditions determine the nets distance from the shore. 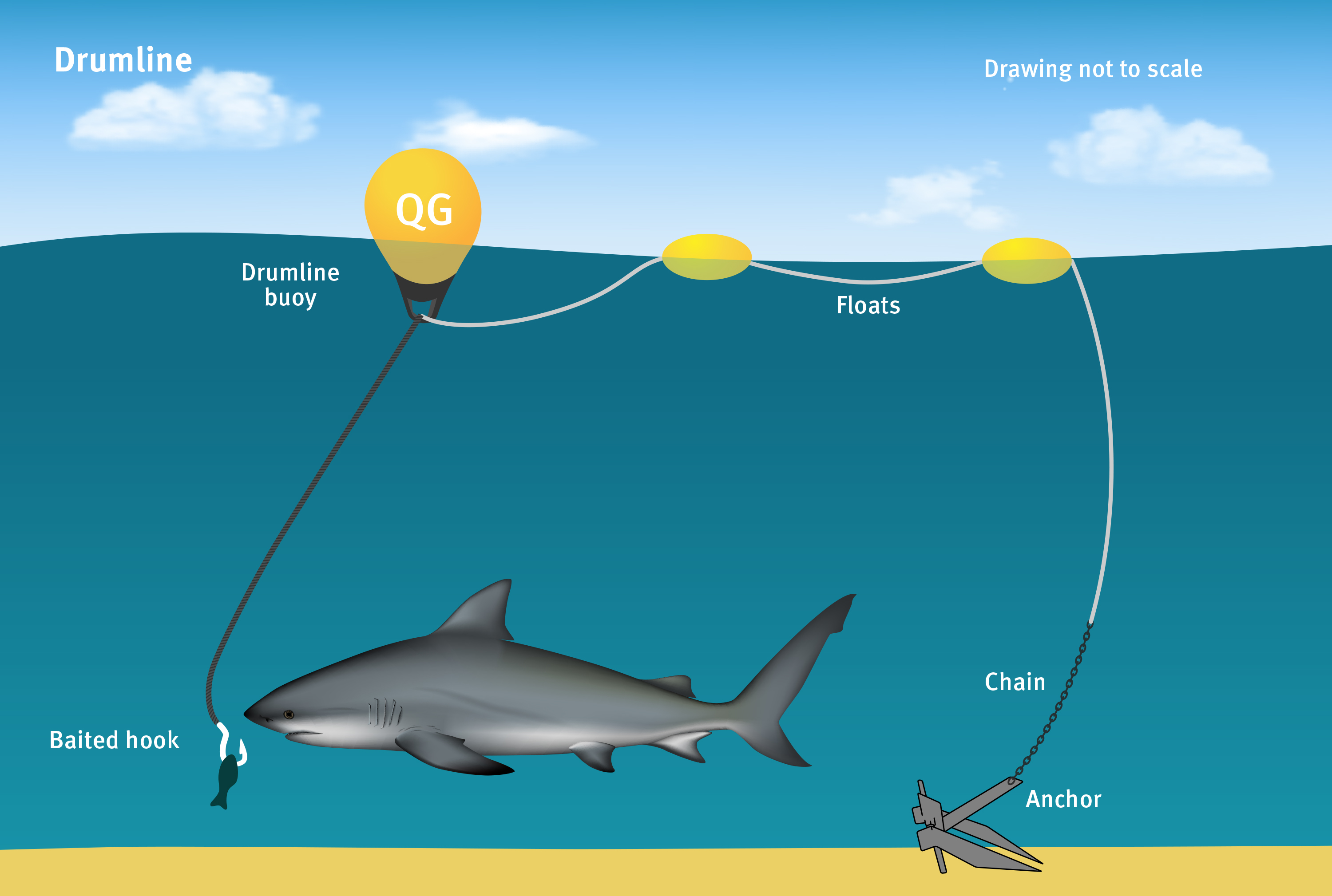 Find out more about the Queensland catch alert drumline trial.

Nets and drumlines are serviced regularly, weather permitting by independent contractors. All equipment is removed from the water for maintenance and replaced with fresh equipment at least once every 21 days.

For equipment inside the Commonwealth Great Barrier Reef Marine Park, shark control contractors check the drumlines and visually assess the catch to determine the species. If a bull tiger or white shark is captured, where possible and safe to do so the contractor will tag the shark with an acoustic tag and/or dart tag and release it. All other animals are released alive if possible.

For all other Queensland coastal areas outside the Commonwealth Great Barrier Reef Marine Park, shark control contractors inspect nets and drumlines and visually inspect the catch to determine the species. Target shark species are removed from equipment and euthanised. Non-target shark species are removed from the equipment and released alive if possible.

There are more than 100 shark species that are known to inhabit Queensland coastal waterways. 19 of these species are identified on the target shark species list.

Shark species that have been associated with unprovoked shark bites in Australia resulting in serious injuries or death are on the target shark species list.

Ongoing research and risk assessments are undertaken to inform any changes to the target species lists.

Bycatch in nets and drumlines

Maritime Safety Queensland issues 'Notices to Mariners' that provide marine safety information, including advice about where SCP equipment is located throughout the state.

If you find equipment on the beach or notice equipment has broken free, please contact the SCP hotline on 1800 806 891 (free call within Queensland).