Figure 1. Monitoring of the central east coast barramundi stock focuses on sampling the Fitzroy River catchment as historically this area reports the majority of the catch.
© Queensland Government

There are six genetic stocks of barramundi a long the Queensland coast (Keenan, 1994). Figure 1 summarises the biological monitoring of the central east coast barramundi stock. Length, sex and age data were collected from 2007 to 2015 from commercial and recreational catches and length only for recreational catch in 2016. To estimate the age, otoliths (ear bones) were removed from the head of some fish and then dried. The otoliths were set in resin so that thin sections could be cut and examined under a microscope. This technique enables a clearer view of the growth bands for this species (Figure 2). The number of annual growth bands indicates the fish's age.

Biological data gathered by this program is used during the regular evaluation of the sustainability of these stocks. Catch and effort information from commercial fishing logbooks and surveys of recreational fishers also play an important role in these assessments. Queensland’s central east coast barramundi stock is classed as Sustainably Fished.

In November 2015, the main fishing area of this stock was closed to commercial netting. Monitoring of the fish stocks in this region continues through a boat ramp survey program that records recreational fishing effort, catch and release numbers and lengths of key fish species, including barramundi.

Figure 2. A thin cross section of a barramundi otolith (ear bone) under a microscope. The red dots identify 11 annual growth bands which were counted to estimate its age.
© Queensland Government

From 2007 to 2015 the biological monitoring program for the central east coast stock recorded the length of 10,083 barramundi from 443 commercial catches and 621 barramundi from 392 recreational catches. Age was estimated from otoliths of 6,399 fish. A major flood in the 2010/11 summer caused major changes in the stock, especially within the Gladstone Harbour catchment. High river flows allow fish to travel from freshwater reaches and impoundments, causing an influx of large barramundi (including stocked fish from Lake Awoonga in 2010/11).

As well as increasing the catchability and fishery recruitment (Robins et al. 2005) of barramundi, summer and spring freshwater flows also increases the survival of juvenile fish spawned in that year (Staunton-Smith et al. 2004). Results are presented separately for the Fitzroy and Gladstone regions as the flood related factors have had different effects on each catchment. 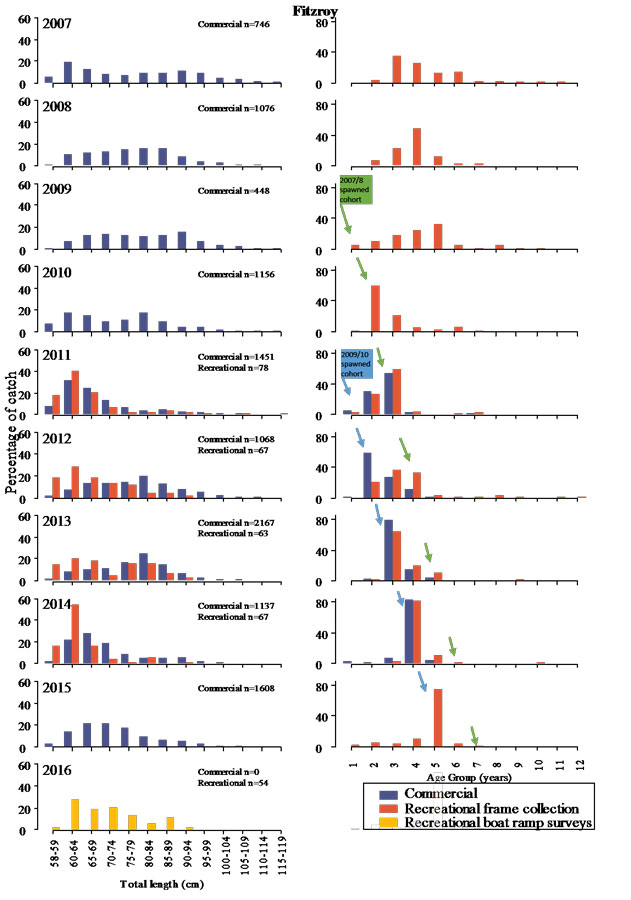 The length frequency of the 2011 catch has large numbers of small fish (58-69 cm TL) (predominantly 2 and 3 year olds), which entered the fishery following the major flooding in 2010/2011. These results, coupled with the higher commercial catch rates, indicate the favourable conditions this stock has experienced for breeding and survivorship, as well as the good recruitment of both wild born and stocked fish into the fishery. 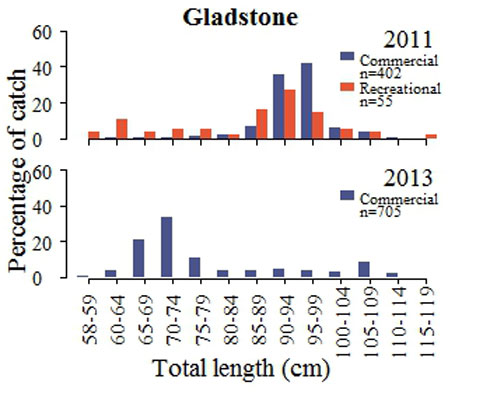 Lake Awoonga, a large water storage dam, is situated in the Gladstone Harbour catchment. The lake has been regularly stocked and over 3 million barramundi were released into the lake between 1996 and 2010. A flood in December 2010 was the first time the dam had overflowed since 1996. During this flood, tens of thousands of stocked barramundi moved downstream from the lake and into the fishery (Wesche et al. 2013). Subsequent floods in early 2012 and 2013 also allowed stocked fish to move downstream of the dam.

Barramundi commercial harvest was 27 times greater in 2011 than 2010 and has yet to return to previous levels. Sufficient numbers of biological samples collected from commercial catches in 2011 and 2013 and the recreation catches in 2011, give insight into the population changes.

Figure 4 shows large fish dominating the catch in 2011, a result of an influx of very large stocked fish. In 2013, a high proportion of 65-75 cm fish recruited into the fishery. Although otolith samples in some size classes prevented the creation of an age frequency, predominantly seven year olds in 2011 and two year olds in 2013 were observed. These results reflect the stocked fish entering and persisting in the fishery rather than an indication of stock fecundity or juvenile survivorship.

The oldest barramundi sampled from the central east coast stock was a 35 year old from the Fitzroy region it was 116 cm (TL) and was caught in 2007.  Many barramundi reach maximum legal length by 10 years old, although some grow slower. 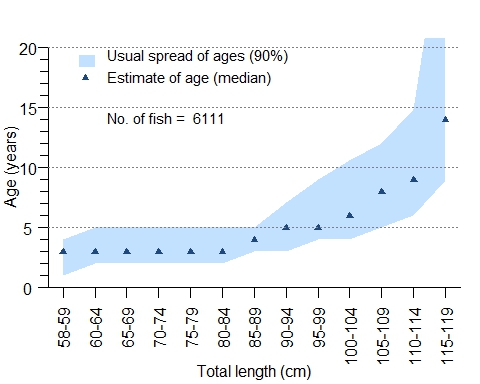 The age of a barramundi from the central east coast can be estimated using Figure 5. Look up a total length and find the corresponding age on the graph. For example, at 83 cm barramundi are likely to be three years of age, although they could easily range between two and five years old.

Thank you to everyone who assisted with the collection of data on barramundi.