Blue swimmer crabs (Portunus armatus) are widely distributed around the Australian coastline. In Queensland, this species is found on sandy and muddy substrates in shallow coastal and estuarine waters along the entire coast, though it is mainly fished in the state's south.

Pilot surveys designed specifically for juvenile blue swimmer crabs were carried out in Moreton and Hervey Bays in early 2006. Annual surveys continued from 2007 to 2009 in February and March in Hervey Bay and in November and December in Moreton Bay, during and at the end of the period assumed to be the peak season for recruitment of small juveniles into the study areas.

From 2009 onwards annual surveys have continued in Moreton Bay only. The sampling of blue swimmer crabs occurs in conjunction with the monitoring of eastern king prawn (Melicertus plebejus) and juvenile snapper (Pagrus auratus). Sampling sites are selected randomly from within the survey area each year. The design of the scientific trawl surveys used to collect blue swimmer crab data have changed over time. Due to the variety of times and locations sampled, especially during the earlier years, a subset of all available data is used to estimate the best index of abundance. This subset contains the data collected during November and December in Moreton Bay from 2007 onwards.

The dataset is also restricted to include only juvenile crabs (0+)—older crabs were caught but these data are excluded from the analysis. Published biological information detailing peak spawning time and growth rate were used to help determine the likely size of the young crabs at the time of the surveys.

Between 2007 and 2014 a total of 18 survey events were completed in Moreton Bay, comprising 1231 individual trawl shots.  During these surveys, 16078 juvenile crabs (0+) were measured and sexed.

Juvenile blue swimmer crabs caught during the surveys ranged in size between 11 and 85mm; the most common size class was 31-35mm. More than 75% of the juvenile crabs caught were between 21 and 55mm. Annual sex ratios of juvenile blue swimmer crabs were similar over the spread of years with an average of 45% females and 55% males. 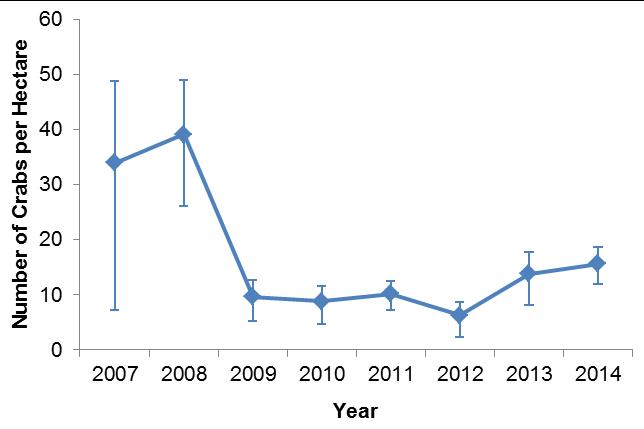 Time of day was an important factor influencing catch rate, which was highest in the period just after dusk. These results support findings by Sumpton and Smith who found that crabs were most active during this period based on emergence from the substrate. Time of day of individual trawl shots is taken into account when calculating the annual index.