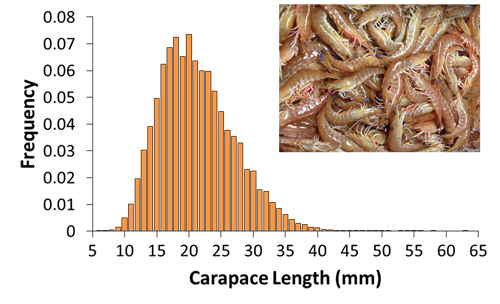 The FIT survey was conducted in key juvenile EKP habitats in southern Queensland waters during the peak recruitment period for the species (November and December). Locations open to commercial fishing as well as areas that are not fished regularly by the commercial trawl fleet were included in the survey.

The FIT survey was designed to sample prawns before they are available to be caught by the commercial trawl fleet. The index of abundance of recruit EKP produced by the survey was combined with other available fishery data to assess the status of the stock annually. Recent assessment of the fishery classed eastern king prawns as sustainably fished. 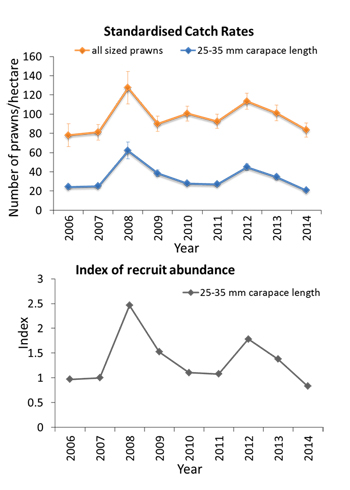 Catch rates of 25-35 mm CL prawns ("recruit prawns") were used to calculate the index of recruit abundance (Graph 2 - Bottom), as these prawns are similar in size to those first caught by the commercial trawl fleet. Smaller prawns (<25 mm CL) are subject to high natural mortality thus have less chance of surviving until reaching the fishing grounds. The catch rates of recruit prawns are compared to the catch rates from the 2007 survey to calculate the index. The highest index of recruit abundance was recorded in 2008 and the lowest was recorded last year in 2014 (Graph 2 – Bottom). The 2014 index was similar to those observed in 2006, 2007, 2010 and 2011. This suggests stocks in 2014 were at a level similar to those that supported commercial catches between 1600 and 2600 t in previous years.

Commercial catch data shows consistent catches of around 2000 tonnes since 2001, and catch rates show an increasing trend from 2000 (Figure 3). Interestingly, catch and effort in the New South Wales EKP fishery has reduced over the past decade, which may also be contributing to increased catches in Queensland, as the stock is shared between the two states. The higher levels of total commercial catch and catch rates seen in 2009, 2010 and 2013 fishing years correlate with the high indices of recruit abundance observed in the 2008 and 2012 FIT surveys. 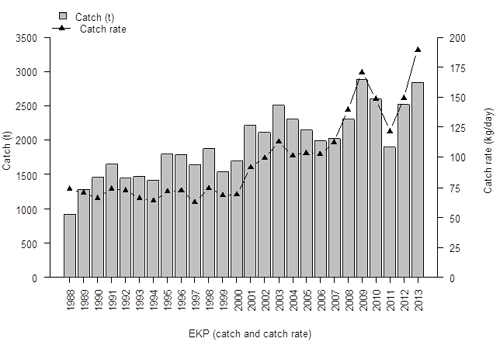