Production losses due to buffalo fly in cattle

Buffalo fly infestations are recognised as one of the most important animal health problems of beef cattle in Queensland. Each fly feeds up to 20 times a day by puncturing the skin and taking blood.

The discomfort suffered by cattle infested with buffalo fly is obvious. Cattle welfare is important when considering fly treatment but it is also important to estimate economic losses to rationalise management decisions.

Most cattle can tolerate a small number of buffalo flies without a detectable loss in production. However, Australian research has shown that buffalo fly numbers of less than 100 per animal can have an effect on weight gain in cattle. Research on the related horn fly in North America showed a reduced    growth    rate with as few as 12 flies per animal. In dairy cattle, a threshold of 30 flies was needed before effects on production were detected.

Infestations have many different effects on cattle. Unfortunately determining a production loss solely attributable to the effects of buffalo flies has often been difficult.

In Queensland beef cattle, a range of losses in production due to a moderate infestation of 200 buffalo flies has been recorded and the losses averaged 15 kg over a 100-day fly season.

Similar research in America on the related horn fly also recorded a range of losses in  weight gains in cattle. For a moderate infestation of horn fly over a 100-day fly season, the reduction in weight gains of the cattle averaged 8 kg.

Reduction in weight gain of calves

Help with downloading and printing files
If you have difficulty accessing files from this website please contact us. 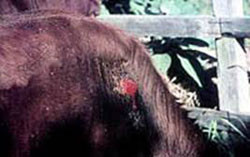 Generally there is no relationship between the number of flies on an animal and the presence or absence of lesions in cattle not treated for buffalo fly. This suggests that lesions may be due to individual sensitivity rather than related to the number of flies.

Most of the buffalo fly related lesions were around the eye or in the mid-neck region.