Since then, Fisheries Queensland has collected data from recreational fishers to monitor the changes in recreational fishing over time. The data is also used to inform our other fisheries management activities.

We collect information from recreational fishers via our boat ramp surveys, including where and how they fished and for how long, the species targeted, the number caught and released, and the length of those kept.

Surveys are conducted at boat ramps from which fishers commonly access the net free zones, and at some references sites outside of the zones for comparison: 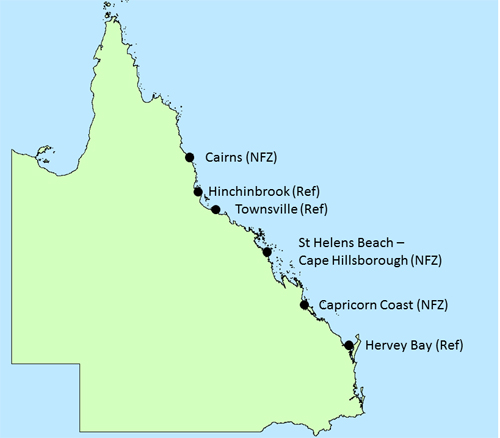 Generally, the net-free zones have been positive for recreational fishing. The predicted flow-on benefits (e.g. tourism) require fishers to be satisfied with their fishing trips, which depends largely on fishers catching more targeted species.

Monitoring the performance of net free zones will continue as part of Fisheries Queensland’s monitoring program.