Animal care and protection laws for dugongs and turtles

The Queensland Government is committed to addressing alleged cruelty in the hunting of dugong and turtles.

On 12 September 2012 amendments were made to the Animal Care and Protection Act 2001 to protect dugong and turtles from unreasonable pain and suffering. The changes removed the exception from animal welfare obligations that existed for Aboriginal people acting according to Aboriginal tradition and Torres Strait Islander people acting according to Islander custom, bringing Queensland's animal welfare legislation in line with other states.

The amendments only mean a change for the small number of Aboriginal people and Torres Strait Islander people who have been using unreasonable hunting practices.

The Queensland Government recognises the positive work already being done by many Aboriginal groups and Torres Strait Islander groups to protect dugong and turtle populations. It is important this work continues and that the implementation of any changes to hunting methods is similarly community-driven. Aboriginal communities and Torres Strait Islander communities are encouraged to continue to work with scientists, animal welfare interest groups and other stakeholders to agree on acceptable hunting practices based on science and practicality, while recognising tradition and custom.

This page provides information on how the Animal Care and Protection Act 2001 (the Act) protects animals, including turtles and dugongs, from unreasonable pain and suffering when hunted and killed under traditional methods.

The rules do not take away hunting rights; however they affect how hunting rights can be exercised and ensures that animals are killed in a way that causes as little pain as is reasonable in the circumstances.

Causing an animal as little pain as is reasonable

Under the Act, a person may be prosecuted for cruelty if they kill an animal in a way that is not quick and humane (meaning the animal doesn't suffer or feel pain). Hunters exercising their traditional hunting rights must use a method of killing that causes as little pain as is reasonable in the circumstances.

The Queensland Government wants to ensure that Aboriginal and Torres Strait Islander traditional hunters understand they can continue to exercise their traditional and customary hunting rights.
The rules only affect traditional hunters if they fail to take steps to cause the animal as little pain as is reasonable.This means that a traditional hunter must exercise care, skill and judgement when hunting and killing an animal and use the least painful method reasonably available to them in their circumstances.

Most animals hunted under tradition or custom will become unconscious if they receive a severe blow to the head using a heavy blunt object. While the animal is unconscious and less able to feel pain, cutting the main blood vessel in its neck which causes it to bleed out quickly will normally achieve a quick death.

However, some species of animals are more difficult to kill quickly. For example, large animals, such as dugongs and turtles, are difficult to make unconscious.

Most traditional and customary hunters kill dugongs by drowning. Direct destruction of the brain would be a more humane way to kill a dugong, however, where this is not appropriate drowning may be the only method reasonably available to a hunter.

Turtles do not die quickly when the head is cut from the body and/or their neck is cut in an attempt to bleed them out. A hunter must destroy the brain to ensure a quick death. To kill a turtle quickly, a hunter needs to know the part of the brain that is most important to destroy.

The part of the brain that needs to be destroyed is located under the position shown by the black dot.

However, it is not easy to destroy the brain. 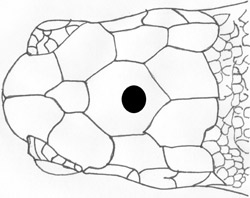 Scientists are working to identify methods to destroy a turtle's brain that may be acceptable to traditional hunters.

What practices must be used?

The Queensland Government does not want to impose particular practices on all hunters. What may be an acceptable practice in one community might be unacceptable somewhere else.

Hunters need to use the best method that is reasonable in their circumstances and use that method with care, skill and judgement.

The Queensland Government encourages traditional owners and communities to work with scientists and others to agree on acceptable hunting practices based on science and practicality, while recognising local tradition and custom.

What practices cannot be used?

Under the Act some practices are unacceptable. A person who uses one of these methods could not say that they had used as little pain as was reasonable and could be guilty of animal cruelty.

These unacceptable practices include:

There may be many other practices that communities and scientists agree are unacceptable because they do not cause as little pain as is reasonable.

Research is continuing into better ways to kill animals that cause less pain. Hunters should periodically check they have the most up-to-date information. Contact us for more information.