In 2016, the commercial fishing industry expressed concern about declining scallop catches in Queensland, and logbook records showed commercial catch rates of scallops were the lowest in the 39-year recorded history of the fishery.

A stock assessment completed in October 2016 suggested the scallop biomass is potentially as low as 5-6% when compared to 1977 levels. This was a significant cause for concern.

To protect the sustainability of scallops in Queensland, urgent management changes commenced on 3 January 2017, which are expected to reduce the total scallop catch by as much as 40% to prevent further declines in scallop stocks.

From 3 January 2017, all six scallop replenishment areas (SRAs) located off Yeppoon, Bustard Head and Hervey Bay, are closed to all scallop fishing. This includes the three SRAs that were due to open on 3 January 2017. The SRAs will remain closed until further notice. 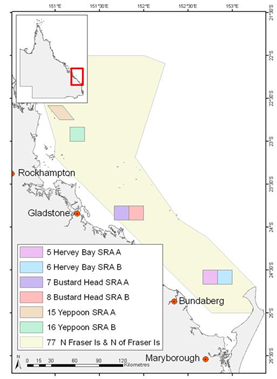 Fishers cannot take or possess scallops in the southern inshore and southern offshore trawl regions between 1 May and 20 November each year.

Scallop nets can still be used in this period; however, any scallops caught must be released and square mesh codend bycatch reduction devices must be used.