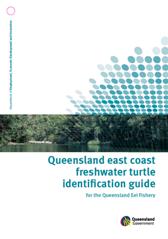 The 'Queensland east coast freshwater turtle identification guide' was developed for use by commercial fishers operating in the Queensland Eel Fishery and contains only those freshwater turtle species that inhabit waters covered by that fishery.  The guide can also help recreational fishers identify turtle species.  All native turtles are protected wildlife in Queensland and must be released if caught accidentally.

Get a copy of the report