Fisheries Queensland monitors the biology of key commercial and recreational species to help assess the sustainability of our fisheries.

Sea mullet (Mugil cephalus) has been monitored since 1999 as it is an important component of the commercial fin-fish catch in Queensland. 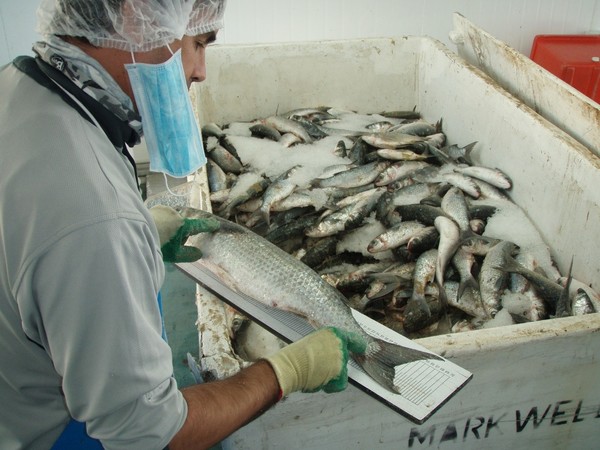 In Queensland, sea mullet inhabit freshwater, estuaries and waters adjacent to ocean beaches along the entire east coast; however, the majority of fish are harvested from waters south of Baffle Creek (Figure 1). Sea mullet are caught by commercial net fishers in estuaries year-round using mesh and tunnel nets (Non-Ocean Beach sector), and along ocean beaches from April to August on their annual spawning migration using seine/haul nets (Ocean Beach sector). They are processed and consumed locally, and some products such as roe are exported with World Trade Organisation approval.

The annual harvest of sea mullet in Queensland has been consistent over a long period of time. Between 2007 and 2018, 1350 to 2050 tonnes of fish have been caught annually (Figure 2, graph A), with an annual average of 1650 tonnes caught over this period. Harvest from the Ocean Beach and Non-Ocean Beach sectors fluctuate annually, but average around 800 tonnes per year since 2007 (Figure 2, graph B). Biological information from sea mullet taken commercially south of Baffle Creek contributes to assessing the status of the stock. Commercial catches from both sectors are sampled throughout the year to collect information about length and sex of fish and estimate their age. Long-term trends in length and age structures of harvested fish help scientists assess stocks.

The age of a sea mullet can be estimated by examining a thin section of its otolith (ear bone) under a microscope. Annual growth rings are formed due to periods of differential growth. Approximately 1000 sea mullet are aged by Fisheries Queensland scientists each year. This information helps determine the age structure of the commercial harvest.

Most fish harvested commercially are between three and five years old, but fish as old as 16 have been sampled. Sea mullet grow at different rates due to a number of factors including their habitat, food availability and sex. On average, a sea mullet is three years old by the time it reaches the minimum legal length of 30 cm total length.

The age structure of the commercial catch assists in determining the status of fish stocks. If age structure is consistent over a long period, and old fish are being caught regularly, this indicates that fishing pressure is not excessive. Results from the monitoring of sea mullet show that age structure in southern Queensland has been consistent for a number of years, and old fish are present in the population (e.g. fish older than six years are caught regularly – see Figure 3). How the information is used

Thank you to commercial fishers and wholesalers who have generously assisted with the monitoring of sea mullet by allowing Fisheries Queensland scientific staff to sample their catches.