Spanish mackerel (Scomberomorus commerson) are widely distributed around the northern Australian coastline. A separate biological (genetic) stock of this species exists on the east coast. Although it is an important recreational fish in Queensland and New South Wales, the majority of the commercial catch of this stock is taken from north Queensland, off the coast of Townsville.

Biological monitoring of Spanish mackerel in Queensland commenced in 1999. The program focuses on collecting information on the length, sex and age of fish harvested by commercial and recreational fishers. Routine biological monitoring is conducted each year so that long-term trends in length, age and rate of total mortality can be monitored.

Biological monitoring data are used for periodic stock assessments as well as used regularly, along with other data, for determining the exploitation status of the stock. Spanish mackerel on the east coast is currently assessed as sustainable.

This factsheet provides results for Spanish mackerel monitoring on the east coast of Queensland, summarised by financial year to match the management cycle of the east coast commercial fishery.

The size ranges of Spanish mackerel harvested by both commercial and recreational sectors are similar (Figure 1), with the majority of fish between 90 to 115 cm total length (TL). The largest fish sampled in 2015-16 was 183 cm (TL). It was caught by a recreational fisher off the beach on Fraser  Island. The majority of Spanish mackerel are available to be harvested by the fishery by the time they are approximately two years of age, although they can be captured younger than this. The majority of fish caught by recreational and commercial fishers are around 2 to 4 years of age (Figure 2), however in 2014-15 the catch was dominated by two year olds that made up almost 60% of the commercial catch and over 40% of the recreational catch. The oldest Spanish mackerel ever sampled in the monitoring program was around 26 years of age and fish older than 10 years are very uncommon in samples.

The sex of Spanish mackerel can be determined by examining their gonads (reproductive organs). Mature male fish have white testes and mature female fish generally have orange coloured ovaries (Image 2). This distinction is less obvious in young fish and outside of the spawning season.

Spanish mackerel have a rapid growth rate with females generally growing faster than males. Females will therefore tend to be younger than males of the same length (Figure 3). 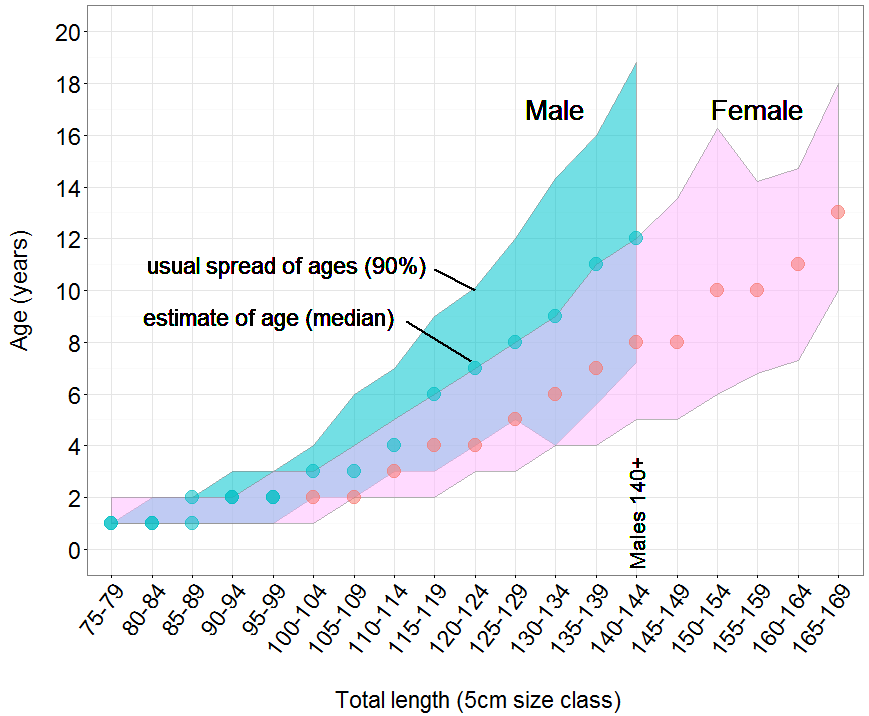 Thank you for your help

Thank you to everyone who assists with the collection of data on Spanish mackerel. This ongoing assistance helps to ensure that the collection of length, age and sex information is representative of the commercial and recreational fisheries during each fishing season. Biological monitoring provides important information for assessing the status of the stocks in Queensland into the future.